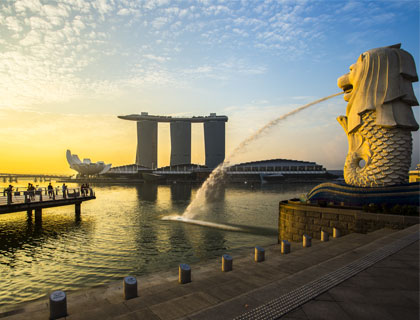 Discover the most important and significant parts of Singapore while learning about its people and culture on this half day city tour. You’ll visit one of the city's oldest temples, the mythical Merlion, Singapore’s spectacular Botanic Gardens and much more. This is a very popular tour so secure your place by booking in advance!

Explore the city by driving round the Civic District, passing by the Padang, Cricket Club, historic Parliament House, Supreme Court and City Hall.

Stop at the Merlion Park and enjoy the impressive views of Marina Bay. Do not miss out on the opportunity to take a picture with The Merlion, a mythological creature that is part lion and part fish!

Learn about the city’s culture when you visit Thian Hock Keng Temple, one of Singapore’s oldest Buddhist-Taoist temples. Your tour will take you past Chinatown before you stop by a local Handicraft Centre and observe craftsmen at work up-close.

Proceed to the National Orchid Garden located within Singapore Botanic Gardens, which boasts a beautiful and sprawling display of 60,000 orchid plants.

The final stop is Little India where you will be surrounded and enchanted by the scent of joss sticks, jasmine and spices.

On Car- Free Sunday, National Gallery and Merlion Park will be replaced by Mount Faber.