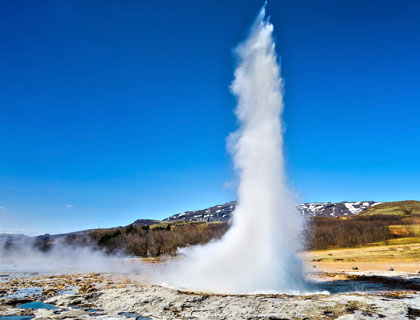 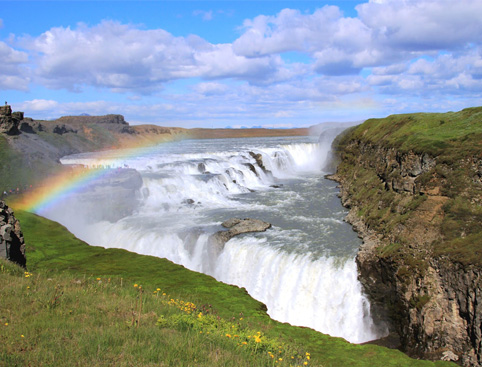 The Golden Circle tour allows you to visit some of Iceland‘s most stunning sights; Geysir geothermal area, the waterfall Gullfoss, and the UNESCO site Þingvellir National Park as well as to learn about growing vegetables in a country which doesn’t get much daylight for most of the year.

Geysir geothermal area is in South Iceland, near Laugarvatn Lake. The area is named after the biggest, and now mostly dormant, geyser Geysir and all geysers in the world owe their name to it. The biggest attraction today is the active Strokkur, which shoots up a column of water up to 30 metres (98 ft.) into the air every few minutes.

Gullfoss is one of the most famous waterfalls in Iceland and rightly so. The three-step waterfall is a part of the glacial river Hvítá and falls into a 62-metre (105 ft.) deep canyon. For the first half of the 20th century, there were ideas about using the waterfall to generate electricity, but thankfully nothing came of it.

The UNESCO site Þingvellir National Park is geologically and historically significant. Apart from being the location of the oldest parliament in the world, Alþingi, it is also a place where you can see the Mid-Atlantic ridge above ground. The Eurasian and North-American tectonic plates pull the country apart by a couple of centimetres per year.

Friðheimar greenhouse cultivation centre is one of Iceland’s biggest greenhouses. We will learn about the magic behind growing delicious, pesticide-free tomatoes with the aid of geothermal heat which Iceland has in abundance. Friðheimar uses pure Icelandic cold water for irrigation and gets help from about 600 bumblebees to pollinate the tomatoes.

Please note while children under 12 can travel free of charge on this tour we will need to reserve a place for them in the coach, so please remember to let us know how many children are travelling and how old they are.